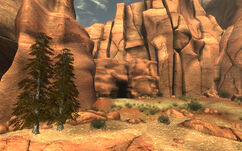 “I'm called Follows-Chalk. Joshua sent me to scout for any outsiders coming up from the Southern Passage.”— Follows-Chalk

The southern passage is a location in Zion Canyon in 2281. It is a connection of tunnels and passages that travel back to the northern passage in the Mojave Wasteland after the Honest Hearts add-on. It is where the journey into Zion begins.

There are three duffle bags located against the rocks near the ambush site, which can be used to safely store items until Honest Hearts is completed.

In addition to the cave, once the main story is completed and the final cut scene has played, in front of the cave entrance will be a footlocker which will contain the following unique items, provided they have not already been obtained:

The southern passage appears only in the Fallout: New Vegas add-on Honest Hearts.

Rock inscriptions just over the bridge

The footlocker
Add a photo to this gallery
Retrieved from "https://fallout.fandom.com/wiki/Southern_passage?oldid=3309132"
Community content is available under CC-BY-SA unless otherwise noted.