The south cistern is a small building in the Mojave Wasteland in 2281.

Due to the fences around New Vegas, the south cistern is most easily approached from the Westside south entrance. The cistern's layout is identical to the layout of most cisterns in the wasteland, with a large central pipe emptying into a trough. The water available in the trough is irradiated, while the water from the valve is not. Apart from a water valve, the building contains very little, apart from a few broken shelves, a desk, and junk such as tin cans and empty bottles.

An NCR MP and NCR trooper will be inside the cistern. When spoken to, they make remarks suggesting that the Courier may be able to gamble with them, but there is no option to do so. They may exit the cistern on the Courier's arrival, heading to Freeside through North Vegas Square and disappearing at Freeside's north gate. These troopers will respawn after a while if they are killed. They can occasionally be seen outside and may sometimes fight a group of Fiends.

The south cistern appears only in Fallout: New Vegas. 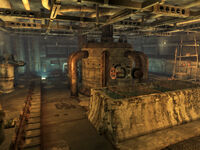