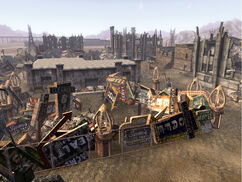 The South Vegas ruins is a location in the Mojave Wasteland in 2281, located southwest of New Vegas.

The South Vegas ruins house many Fiends due to their occupation of Vault 3. Entrance to the ruins can be gained near the Poseidon gas station and it has an exit to Fiend territory. Zapp's Neon Signs is a building to the north, housing Fiend leader Duke and his crew.

The South Vegas ruins appear only in Fallout: New Vegas.

South Vegas ruins map
Add an image to this gallery
Retrieved from "https://fallout.fandom.com/wiki/South_Vegas_ruins?oldid=3218833"
Community content is available under CC-BY-SA unless otherwise noted.