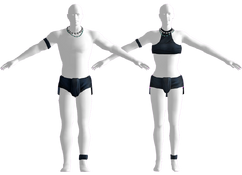 The Sorrows outfit is a piece of clothing in the Fallout: New Vegas add-on Honest Hearts.

The Sorrows outfit consists of a simple loincloth for males, with an additional sports bra-style top for females. It is decorated with necklaces and has bands on one ankle and upper arm.

It provides a Damage Threshold of 2, and a bonus of +5 to the Survival skill.

The Sorrows outfit, along with Caesar's armor, the park ranger hat, and the US Army combat armor are the only pieces of clothing in the game that provide a Survival boost.

Retrieved from "https://fallout.fandom.com/wiki/Sorrows_outfit?oldid=3313987"
Community content is available under CC-BY-SA unless otherwise noted.