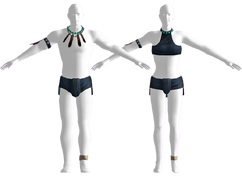 The Sorrows adorned outfit is a piece of clothing in the Fallout: New Vegas add-on Honest Hearts.

The Sorrows adorned outfit consists of a simple loincloth for males, with an additional sports bra-style top for females. It is decorated with necklaces, an ankle band and an armband with two small feathers.

It provides a Damage Threshold of 2, and a bonus of +5 to the Survival skill.