The Father in the Cave 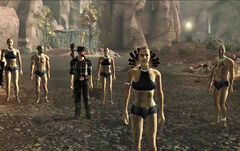 The Sorrows are a tribe living in the Zion Canyon area in 2281.

The Sorrows' history is closely tied to their religion. The original Sorrows were a group of children, the eldest born no earlier than 2109. They spoke English and were literate, and had escaped a place known only as "The School." Nothing is known about this place, save that the children would scare each other with tales of "The Principal."[1] Less than a year after the children arrived in the Narrows,[2] notes and gifts began to appear from seemingly nowhere. At first, story books, later, medical books and weapon manuals replaced them; the sort of thing that would help the children survive the post-apocalyptic world.[3]

All the notes were signed "the Father." Some contained practical advice, others provided spiritual guidance, advising them to read and learn, be kind and modest, to protect one another and fight only those who posed threats to them, and telling them that Zion was the Father's gift to them, as an apology for the sorrows of their lives and the sorrows of the Great War.[3]

Eventually, the gifts became fewer and far between, and one day one final note was discovered. It contained a personal message for each individual member of the group, an assurance that their kind natures had pleased the Father, and a message that the Father would step back from their lives, but keep a silent vigil.[3] Most of the group's later history is unknown, but it is known that at some point they began calling themselves the Sorrows, and attempted to search the caves in the region for traces of the Father.

After the Sacking of New Canaan, the New Canaanites fled to Zion Canyon and brought the White Legs with them. With their arrival and assault on all tribes, the children and elderly of the Sorrows were evacuated to Dead Horse Point.[4] Daniel has been in contact with the tribe for at least six years and is attempting to make amends with the tribe for bringing the White Legs and endangering the tribe.[5][6]

The Sorrows are a friendly tribe, and possess a hunting-based culture, rather than a warrior-based one. Their rite of passage reflects this; it involves a young Sorrow hunting and killing a yao guai and fashioning a Yao guai gauntlet from its paw.[7] In accordance with this belief, the Sorrows have sensitive and innocent souls and mourn the loss of everyone, even those that would seek to hurt them, like the White Legs.[8] It seems they also raise normal geckos, since many can be seen in their camp and are friendly.

All Sorrow tribals tattoo themselves with the symbol of the Virgin River. This symbol is meant to remind them of the suffering the tribe has had to face to reach the point where they are now and to show their lasting connection to the Virgin River, and, in part, Zion and nature as a whole.[9]

The Ghost of She

The Ghost of She is a legend that embodies Sorrows culture. According to Waking Cloud, a clever and curious girl lived among the Sorrows tribe long ago. One day, she slipped away from the camp and went to play in the nearby caves. She did not know that yao guai slept in this cave and she was killed by one. The tribe wept at the loss and because the girl died before her naming day, her ghost remained restless and continued wandering the earth. Many hunters tried to slay the beast, but were unsuccessful. The tribe's shaman remarked that because the beast had consumed the girl, the two were now one.[10]

The Sorrows' ancestral religion involved the exclusive worship of a spirit known as "The Father in the Cave" who helped the first Sorrows find their place in Zion and provided them with gifts to teach them how to survive in the recently destroyed world.[11] The caves that the Father dwelt in are considered sacred to the Sorrows; entering any of these caves is forbidden and considered taboo; those that seek them out are taken from this world.[11][12][13] To ensure these caves remain untouched, they are marked with white hand prints.[14]

Daniel has been trying to convert them to Mormonism as of late, and has experienced some success due to the parallels between the two religions.[15] For example, the Sorrows now believe that the Father's holy bride (Mary) and holy son (Jesus) were given unto the world to save it. They dwelled in the caverns of the mountains, caverns which can still be seen today. The people sinned against God and were punished with the End That Came in Fire and the loss of the holy tongue (English), and that only the New Canaanites were spared.[11][16] Daniel is apparently unaware of his failure to get his message across clearly.[17]

Main article: Language of the Sorrows

Examples of words and phrases

According to Joshua Graham and Waking Cloud, the signature weapon of the Sorrows is the yao guai gauntlet.

The Sorrows appear only in the Fallout: New Vegas add-on Honest Hearts.

“[H]ow the DLC shipped was not how it was planned. The tribes in Zion are descendants of a mix of North American native people as well as other American citizens and European (of various non-native ethnicities) tourists/campers. This survives in the language of the Dead Horses, for example, who use a large number of German-derived words.

In the first design docs for HH, every tribe was supposed to have members from all of the F3/FNV ethnic groups. However, there was a complicating factor: body art. The various tattoos and body paints we needed to texture the bodies multiplied the number of required textures. They couldn’t simply be layered on (as they can in F4), but were entirely new body textures that dramatically increased the amount of texture memory being used. For that reason, each tribe wound up having only one body texture per sex. This compressed their ethnicities into homogenized blends, with Dead Horses being a darker tan, Sorrows a light tan, and White Legs (under the body paint) fairly pale.

As a minor point, Daniel was specifically supposed to be (and was, in data, for most of development) Asian. I don’t know when, how, or why he was switched to Caucasian, but that’s how he shipped. It’s frustrating, because those changes slot Joshua and Daniel as white guys among (mostly) brown folk when 1) they weren’t supposed to be white guys and 2) the tribes were specifically called out as ethnically and culturally mixed without any real-world analogues.

Regarding the “natives as aesthetic” criticism, the patterns we used for the three tribes’ body art are not based on any current or historical native American body art (AFAIK). There are in-fiction explanations for each tribe’s specific choices. The White Legs initially colored themselves white to blend into the Great Salt Lake (where they are from) and they dread their hair out of reverence for Ulysses. The Sorrows use the river pattern to reflect their suffering and their connection to the Virgin River in Zion. The Dead Horses mark various accomplishments on their skin and decorate their clubs with .45 shells out of their respect for Joshua Graham.”— Joshua Eric Sawyer, Frog Helms Fan Club