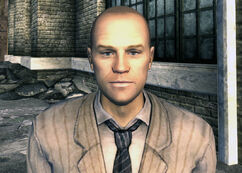 “You people are crazy!”— Soren to Van Graffs

Mr. Soren is a business man found in Freeside in 2281.

Mr. Soren is a business man whose associates deal with the Silver Rush. He is having an argument with Gloria Van Graff the only time the player character sees him. During the argument, he protests that he and his associates want to adjust the second payment on an order for weapons due to the quality of the weapons being below expectations. In response, Jean-Baptiste Cutting kills one of the Van Graffs' own guards in a show of force. Gloria then says she expects the payment the next morning, and Soren runs out through the door, fearful for his life.

Retrieved from "https://fallout.fandom.com/wiki/Soren?oldid=3124295"
Community content is available under CC-BY-SA unless otherwise noted.