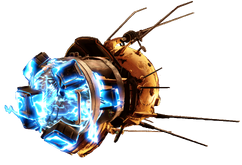 “By the way, this is the new Sonya Mk. II. Given recent circumstances, she is more offensively capable than the Sonya you knew.”— Mel

Sonya is a modified Eyebot used for tunneling. She is in the Commonwealth with her owner Mel in 2287.

Bobbi No-Nose brought in several workers to assist with excavating a tunnel through the Boston underground to the alleged Diamond City strongroom, in order to rob it, which is actually a cover for a heist she is planning against Hancock, called the Big Dig.

Upon the arrival of the Sole Survivor, Bobbi begins to look for a way to speed up the digging after her miners are driven out by mirelurks. She remembers her old contact and tech expert Mel, who is skilled in robotics. Before being imprisoned in the DC lockup for attempting to tamper with the automated waiter Wellingham, Mel was working on a heavily modified Eyebot he named Sonya designed to blast through loose sediment with a powerful sonic pulse.

The Big Dig: After recruiting Mel, he joins the dig alongside Sonya. She is essential for the mission as she is used to knock down the walls which lead to the group's main goal.

Sonya appears only in Fallout 4.

Sonya inside The Dig during The Big Dig side quest
Add a photo to this gallery
Retrieved from "https://fallout.fandom.com/wiki/Sonya?oldid=3397514"
Community content is available under CC-BY-SA unless otherwise noted.