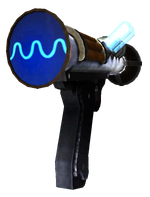 The sonic emitter - revelation is a weapon in the Fallout: New Vegas add-on Old World Blues.

The pistol's chassis is composed of a grey metallic tube outfitted with four vacuum tubes, a housing for a small energy cell, a conical muzzle, and a rear-mounted oscilloscope, all attached to a pistol grip. It shares some visual features with other pistol-grip energy weapons, such as the pulse gun, Euclid's C-Finder, and the recharger pistol. When the trigger is pulled, the vacuum tubes light up as the weapon charges for a moment before firing concentric rings of blue energy at the target.

It can be upgraded to disable force fields throughout the Big MT facility, unlocking otherwise-inaccessible areas. With the assistance of Blind Diode Jefferson, it can also be reprogrammed with other audio samples found on holotapes throughout the facility that alter the color of the oscilloscope and energy rings, as well as introducing unique effects when the weapon scores a critical hit.

The sonic emitter - revelation is an Energy Weapons pistol with bonus damage against robots and power armor wearers, and a unique "critical strike paralysis" effect, temporarily knocking down smaller robots (such as protectrons and cyberdogs), rooting larger robots, and paralyzing non-robotic targets. This modulation of the sonic emitter has a blue oscilloscope.

As a one-handed Energy Weapon, the sonic emitter - revelation is affected by The Professional perk, and counts as an improved holdout weapon.

When scoring a Critical Hit, the target is paralyzed for 10 seconds, similar to the Compliance Regulator.

The sonic emitter - revelation can fire a total of about 495 times using standard cells, the equivalent of 21 reloads, from full condition before breaking.