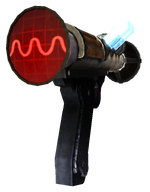 The sonic emitter - opera singer is an Energy Weapons pistol with bonus damage against robots and power armor wearers, as well as a unique "critical strike dismemberment" effect, crippling the target's limbs and reducing its total HP by 20 HP on critical strikes. A lethal critical hit will dismember the target, even if the Bloody Mess perk is not active. This sonic emitter modulation has a red oscilloscope.

As a one-handed Energy Weapon, the sonic emitter - opera singer is affected by The Professional perk and counts as an improved holdout weapon.

The sonic emitter - opera singer can fire a total of about 495 times using standard cells, the equivalent of 21 reloads, from full condition before breaking.

The holotape for the modification, Audio Sample - Opera Singer, is located in Higgs Village inside of house #108, on the second-floor bedroom night stand.