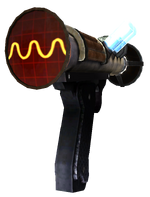 As a one-handed Energy Weapon, the sonic emitter - Gabriel's bark is affected by The Professional perk, and counts as an improved holdout weapon.

The knockback effect, which is affected by Stonewall, will push targets away for a total of 15 game units.

The sonic emitter - Gabriel's bark can fire a total of about 495 times using standard cells, from full condition before breaking.

The holotape for the modification, Audio Sample - Gabriel's Bark, is located in X-8 research center's residential test facility, in a dig-hole spot of the cave area with Gabe.