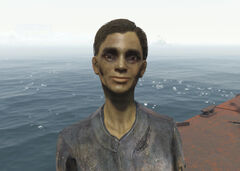 Songbird is a deceased member of the Railroad in the Switchboard in 2287.

Her corpse can be found inside the Switchboard during the quest Tradecraft. It appears she attempted to defend it and is found in the middle of some turrets.

In earlier stages of development she had a slightly different name, given the editor ID RR102CorpseSnowbird. A character by the name of Snowbird is mentioned in terminals at Ticonderoga safehouse.

Songbird appears only in Fallout 4.

Retrieved from "https://fallout.fandom.com/wiki/Songbird?oldid=3131596"
Community content is available under CC-BY-SA unless otherwise noted.