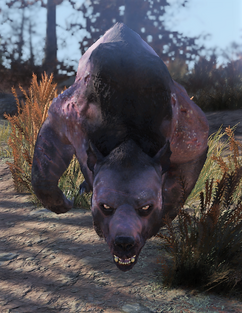 In a small cave, upstream from Site Alpha

The son of Fluffy is a unique yao guai in Appalachia in 2102.

He is the child of Fluffy, a bear that was experimented on before the Great War by Dr. Frank. He can be encountered during the Unsolved: Tracking Terror quest.

Prior to patch 1.1.4.3, the son of Fluffy could spawn as a legendary creature. This was unintentional and fixed in the patch.

The son of Fluffy appears only in Fallout 76, introduced in the Wild Appalachia update.

Retrieved from "https://fallout.fandom.com/wiki/Son_of_Fluffy?oldid=3244251"
Community content is available under CC-BY-SA unless otherwise noted.