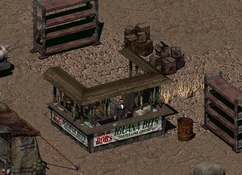 The Son of Bob's Iguana Bits stall is a small food vendor run by Mikey Frazier in New California in 2241.

The stall is quite small and can be found due north of where the Chosen One enters the Bazaar from outside the New California Republic by either foot or car. It sells predominantly iguana bits as the name suggests, though whether the 'iguana' in it is debatable, due to Mikey's father's choice of ingredients: human rather than iguana.

Son of Bob's Iguana Bits appears only in Fallout 2.

Retrieved from "https://fallout.fandom.com/wiki/Son_of_Bob%27s_Iguana_Bits?oldid=2288697"
Community content is available under CC-BY-SA unless otherwise noted.