The Legendary Run side quest 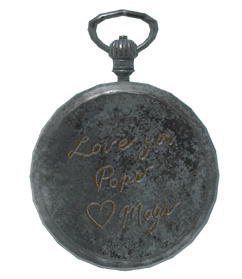 “Help Maggie Williams retrieve a priceless item from Monongah Mine.”

Something Sentimental is a side quest in the Fallout 76 update The Legendary Run.

The quest starts by traveling to Foundation and speaking with Maggie. Alternatively, one can enter Monongah Mine during the A Colossal Problem event and pick up a holotape entitled A father's goodbye, which will also lead to her.

She tasks the player character with finding a way to enter the mine for the purpose of finding any trace of her father, Earle. She mentions that a large explosion may pry the mine's entrance open. Another clue as to how to gain entrance can be found in the form of a raider's note.

In any case, the next step is to personally drop a nuke on Monongah Mine, triggering the event quest A Colossal Problem, thus gaining access to the mine's interior. Progressing the event quest results in the player character finding and having to kill her father, who has mutated into a powerful wendigo colossus. Afterward, one can find his pocket watch on his remains.

Traveling back to Maggie will conclude the quest with different outcomes: [clarification needed]

Although the quest's existence was known prior to the release of Wastelanders, it was ultimately not released on April 14, 2020, alongside the update's first release. It was finally activated on August 18 in The Legendary Run patch 1.3.3.31, following further testing in the game's Private Test Server.[1] It was originally slated to be included with Patch 20, then Patch 21, but was delayed both times to allow for polishing and internal testing.[2]

Retrieved from "https://fallout.fandom.com/wiki/Something_Sentimental?oldid=3464808"
Community content is available under CC-BY-SA unless otherwise noted.