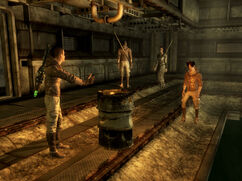 Johnny and his gang in the north sewers

“Some squatters decided to take space where they don't belong, over by the playground. We'd prefer to keep 'em off the streets and out of sight.”— Crandon

Someone to Watch Over Me is a side quest in Fallout: New Vegas.

Go to North Vegas Square and talk to Crandon. Ask him if he needs any help, and he will ask the Courier to deal with unwanted squatters that have recently moved into the area. (Note: a Speech check of 45 or a Barter check of 35 is required to initiate this response). Travel to the squatters, and talk to Squatter Bill. From here, the player character has three options:

Once that is done, return to Crandon.

Crandon will be impressed with the work, and assign a new mission. This time, it requires dealing with a few troublemakers in the sewers. Enter the North sewers manhole. From here, follow the map marker untiling reach a group of Greasers. Talk to the leader of the group, Greasy Johnny. One has five choices:

Attacking any of the Greasers, even after peacefully resolving the quest with a Speech or Barter check, will result in New Vegas citizens in the immediate area becoming hostile and will attack along with the Greasers, but killing them as well results in no karma or reputation loss. New Vegas citizens not in the immediate area of the fight remain friendly to the Courier.

Once the Greasers are dealt with, return to Crandon for the next assignment. He will tell the player character to see Mrs. Hostetler, because her daughter is getting to know the wrong crowd of people. Follow the map marker to Hostetler home, which is due south of Crimson Caravan Company and northwest of Durable Dunn's sacked caravan. Inside, talk to Mrs. Hostetler about any work needing done. She will ask the player character to spy on her daughter, Alice Hostetler, to see what her new friends are up to.

Travel back to North Vegas Square and speak with Jules. He will tell you Alice is hanging out with Andy Scabb and his crew in The Gray. Enter The Gray to search for Andy and Alice's whereabouts. Inside are two thugs guarding Andy's room. There is one down the hall around the corner and one directly in front of the door. One must enter Andy's locked room, either using 50 Lockpick, or a key from one of the Thugs guarding the door; either key can be stolen or taken off a thug's corpse. With Speech 70, one can lie to the thug nearest the door and he will leave his post, otherwise, one can simply kill him without gaining any infamy, or wait for him to leave his post voluntarily, as happens on occasion.

Once the player character is in Andy's room, pick up the Henchman message to Andy Scabb underneath the TV. As the player character leaves, they will be confronted by the ghoul Andy. One can lie to him with 65 Speech. Andy adds an optional part of the quest, which involves helping him steal the Crimson Caravan money from the Hostetlers. Although it is possible to obtain the note from Andy's room without first having spoken with Jules, the confrontation with Andy will not take place if one does this.

After dealing with Andy, the player character should return to the Hostetler house to report to the mother, but upon entering they will be approached by Alice Hostetler who is very upset. Talking her out of attacking her mother is easier with 70 Speech or 7 Intelligence, but it is also possible through the available dialogue options. One can ask her if she has the money and she will say that her mother has it in the bedroom. If the player character says they will wait for her to get it, Alice has a change of heart. The player character can then ask for her to give them her gun, a 9mm pistol. After talking her down, they can suggest that she reconcile with her family and stay with them, or to leave and never come back. There is a second Speech check (Speech 75) that convinces Alice that only she can answer her dreams which results in good karma. Or skip the second Speech check (Speech 75) and one will have the option of "Give them a chance," the player character will get good karma and Alice stays alive. Talking to Mrs. Hostetler completes the quest.

For the best possible ending here, pass the first Speech check. Then when getting the option of "Do you have the money" select it and the next set of choices find the option of "Okay, go ahead. I'll wait for you." She has a change of heart and one can ask for her 9mm. Do not taunt her though, or she will then commit suicide. If one got her gun then say, "You should stay with your family - reconcile with them." The player character gets good karma, the gun, the reward, and Alice lives.

When the player character has stopped Alice from killing her parents and made her leave, the quest will tell them to talk to Mrs. Hostetler. One can either kill her themselves, looting the 1000 caps and gaining negative karma, decline any reward and gain positive karma or get 200 or 500 caps, depending on if if one demanded a reward or told her Alice would have left anyways respectively. Another solution is to talk Alice into killing her mother. She then gets upset and flees the home. The quest is completed and negative karma is earned. The player character can also loot the mother's body and take the 1000 caps and her guns. She has a lever-action shotgun and some ammunition as well.

Retrieved from "https://fallout.fandom.com/wiki/Someone_to_Watch_Over_Me?oldid=3430714"
Community content is available under CC-BY-SA unless otherwise noted.