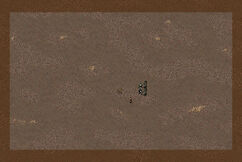 Watch the confrontation between a farmer, his family, and the Enclave

Some people in the wrong place at the wrong time is a scripted special encounter in Fallout 2. It will take place on August 30th, 2241 when traveling the world map, or if in a world map location on this date, the encounter follows as soon as the Chosen One enters the world map again.

The Chosen One stumbles upon a confrontation. On the right side, two Enclave soldiers wearing advanced power armor and armed with miniguns, and Frank Horrigan, one of the Enclave's Secret Service agents. And on the left side is a farmer, his wife, and their small child, all of which are unarmed and unarmored.

Frank Horrigan demands the man and his family to come with him and his men immediately, to which the farmer refuses, demanding to be left alone as he will never support the cause of their the Enclave's superiors. After, Horrigan issues a second and final warning to the farmer and his family, or that "they will be made an example of". [1]

Still refusing to comply with the new strange group, the farmer replies that he would rather what knowledge he has disappear with him into the grave. With that, Horrigan orders his two troopers to kill them all, and they are promptly executed, dying rather gruesomely at the unleashing of two discharging miniguns upon them.

Horrigan and his troopers then wave the Chosen One away, stating to them it is none of their the Chosen One's business, and that they should turn around and walk away.

Retrieved from "https://fallout.fandom.com/wiki/Some_people_in_the_wrong_place_at_the_wrong_time?oldid=3038328"
Community content is available under CC-BY-SA unless otherwise noted.