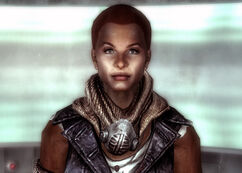 “Oh, sure. Take your time. No rush, not like we're about to be sliced and diced by... who the hell knows what. Fine. So they've kept us alive this long for a reason, right? Seems to me they'd want to make sure we stay alive for now. So you and me, we have ourselves a little fist-fight. Trick 'em into thinkin' one of us ain't going to last too long. Make 'em come in here and break it up. And when they do, we turn on 'em. We take out the guards, and get ourselves the hell out of this box.”

Retrieved from "https://fallout.fandom.com/wiki/Somah?oldid=3081426"
Community content is available under CC-BY-SA unless otherwise noted.