4000/4500 XP
Vault City citizenship
“Those... things... are operating a damaged atomic power plant. You see, THEY are immune to radiation...they don't care that they are slowly killing us with their poisons.”— Joanne Lynette

Solve the Gecko powerplant problem is a side quest in Fallout 2.

The nuclear reactor in Gecko is the source of much friction between that community and Vault City. The reactor is damaged, and is putting out a considerable spill of radioactive coolant into the groundwater in the region. People in Vault City are becoming ill due to this.

You can blow up the reactor either by shutting off the coolant yourself, or conning one of the reactor's tenders to do it for you. The coolant report in Harold's desk is enough to get them to shut down the coolant system for you. The reactor melts down, and the problem is solved. The downside is now you are vilified in Gecko, and you've essentially destroyed the lives of dozens of peaceful ghouls, and now Lynette will not let you back into Vault City. She believes that the destruction of the plant will cause mass contamination and has the guards throw you out. 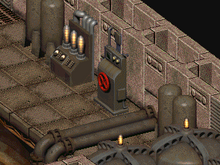 This approach takes a little more effort, but earns you both gratitude and more experience points than frying the reactor. After asking Harold what his job is, he tells you that the reactor has a broken part. The hydroelectric magnetosphere regulator failed, and that's why the plant is pumping out radioactive coolant. The part needs to be replaced, but there's only one source: Vault City.

You may think that, with a solution in hand, Lynette would be happy to hand over the part and put the whole matter behind her. You would be wrong. Lynette will do absolutely nothing to help Gecko, even if it means helping her city in the process. Bringing up the idea can very easily get you banned from Vault City for good.

Instead, talk to Senior Councilmember McClure, in the large conference room nearby. He'll see the wisdom in repairing the plant, and send word to Randal, the Chief Amenities Officer in, as expected, the Amenities Office, to have the part ready. Fetch the part from Randal and return to Gecko.

Once inside the reactor control room, you have two options. You can make the run through the reactor pit room yourself, taking some damage and gaining some radiation, or you can reprogram the maintenance robot, an aging and cantankerous Mister Handy, to do the job. The problem with the robot is that its logic circuits have long since gone to that big computer in the sky. You need to map out its path, using machines as waypoints, before you can get it to install the replacement part. With the installation of a functioning Hydroelectric magnetosphere regulator, the plant runs clean again, and the radiation threat is over. (Note that if you fight the Renewal before repairing the reactor the power-plant, your reputation in Gecko will lower to antipathy and the guards will attack you when you attempt to talk to them or proceed past the reception area of the plant.)

In order to fix or fry the plant with the use of the robot you must give the robot the hydroelectric magnetosphere regulator (the option appears when you try to initiate the repair sequence) and then put in the following commands, in the reactor terminal, for the robot to work. (Incidentally, the order of commands is the same as the reverse order of the last 5 planets in the Solar System, before Pluto was declassified as a planet.)

It may sound very complicated, but if you place the commands in the correct order and hit Execute Commands you can just sit back and watch the robot do all the work—or if you choose to demolish the plant, RUN!

Also, you can just give the regulator to Festus and he can install it for you. He won't want to install it first and you need to persuade him to do it. You earn 4250 XP for this.

Repairing the plant eases the tension between Gecko and Vault City, and unlocks another quest: to Optimize the powerplant.

Whichever way you dealt with the problem, Gecko's reactor is no longer a threat.

If you blew up the reactor, you get 2500 experience points (with a 550-point bonus if you braved the reactor pit and closed the coolant valve yourself, or if you convinced Hank to do it for you). However, talking to ghouls in Gecko will cause them to attack you, and the entire community will despise you.