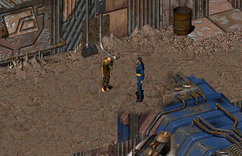 “Well, there are also the Fools. They would control Scrapheap, if the Crypts were gone. The two gangs fight over who controls this place. Currently, the Crypts are on top. Now that you are here, things could change.”— Lex

Solve Scrapheap's gang problem is the main quest in the Fallout demo.

Upon entry to Scrapheap, the Vault Dweller encounters a citizen named Lex, who is the leader of the non-gang inhabitants of the town. This man warns them of the two gangs inhabiting the town and tells them not to trust either one. He asks for help in eliminating both gangs. The Vault Dweller can then choose to help Lex or side with either gang.

There are four ways to complete this quest:

The Vault Dweller must eliminate both gangs in order to complete this quest this way. This is not an easy task to accomplish. The Dweller could just go in shooting every gang member in sight, or they could do it the easy way. Siding with the Crypts allows there to be a gang war between the two. The Vault Dweller could just wait until they kill each other off, and eliminate the remaining gang members. This ends the demo with a message saying that the citizens of Scrapheap take over control of the generator and the town, and are forever grateful to the Vault Dweller for dealing with the problem.

The Vault Dweller can go into the largest building and speak to Rayze, the leader of the Crypts. He will tell the Vault Dweller to either leave the town or join the Crypts in eliminating their rivals. This causes a gang war between the two. Eliminating all of the Fools will end the demo with a message saying that the Crypts maintain the generator and continue with ruling over the town.

If looking for a challenge, siding with the Fools is the way to go. Talking to Baka will allow the Vault Dweller to join her in "eliminating" the Crypts. She will tell them to go infiltrate the enemy, but will not actually start a gang war. The Vault Dweller must defeat the entire gang by themselves. Attacking Rayze first and hitting him with a burst shot may kill him in one go if the Vault Dweller can get close enough. Once he has been eliminated, the rest of the gang is not too difficult to kill. With shoddy accuracy, they tend to miss quite a few shots. Make sure that the two guarding the gate, Rock and Skizzer, are also killed as they are part of the Crypts as well. Once finished, the demo will end saying that the Fools take control of the generator and the town.

The final and easiest way to complete this quest is by destroying the generator in the main building. This can only be done by destroying the Fools first. One of the dead Fools will hold an item called wire cutters (this item cannot be stolen). They can be used on the generator in order to shut it down. The Crypts and any surviving Fools leave the town. Lex thanks Max for getting rid of both gangs, but says that his people will have a poor life without fixing the generator. He asks that Max repair the generator. Although the repair skill can be used, a message pops up saying the generator cannot be fixed, dooming the town to fall apart after their only source of energy is gone. After this, the demo ends.

This quest appears only in the demo, and not the full release.

Retrieved from "https://fallout.fandom.com/wiki/Solve_Scrapheap%27s_gang_problem?oldid=3228986"
Community content is available under CC-BY-SA unless otherwise noted.