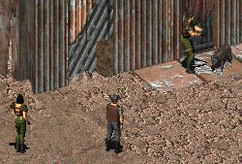 Junktown, outside of the casino

100 XP
Dogmeat as a companion

“It was the 'pet' of a traveller. When the traveller died, this damn dog just plopped its furry ass down on my doorstep and wouldn't leave.”— Phil

Solve Phil's Canine Conundrum is an unmarked quest in Fallout.

To start this quest, the Vault Dweller needs to go to the Casino area of Junktown. To the right of the entrance area, there is a pair of people trying, unsuccessfully, to enter their house. The reason they cannot enter is that Dogmeat is blocking the door.

Simply wearing a leather jacket (which will remind the dog of its former master) or giving the pooch some iguana-on-a-stick will solve the quest and let the couple enter their house.

In the Fallout Demo, Dogmeat didn't play a role in this quest. A unique dog, simply named "Dog," was found here instead, and the only option to get it as a companion was to feed it iguana bits (which appear as "on-a-stick").

Wearing the leather jacket to convince the dog to follow is a reference to Mad Max, where the same happens.

Retrieved from "https://fallout.fandom.com/wiki/Solve_Phil%27s_Canine_Conundrum?oldid=3345586"
Community content is available under CC-BY-SA unless otherwise noted.