Outdoorsman
“Truth is, I come from a long, long line of doctors... but growing up, it never stuck. Lost interest in school, couldn't make the grades. The Army felt like a place where I could make a difference, so I enlisted right out of high school.”

Solomon Hardy is an initiate and medic in the Brotherhood of Steel, as well as a potential lite ally and vendor in Appalachia. He was unlockable upon reaching rank 50 of Season 3: The Scribe of Avalon, and a plan for him was released with the Night of the Moth update.

Solomon is originally from Detroit,[1] coming from a long line of doctors, including both of his parents. Though he was interested in continuing that tradition, he struggled in school. Accordingly, he joined the United States Army after graduating high school as he felt that it offered the opportunity to make a difference.[2] From Detroit, the Army helped him travel all over and experience new places.

By the time the bombs dropped, Solomon had resumed his education and was in his final year of medical school, far from home, though he never was able to get a medical degree. He traveled from place to place after the war, until he finally crossed paths with Paladin Rahmani's First Expeditionary Force. Seeing the opportunity to continue to help others and having formed a close relationship with Rahmani herself, Solomon eagerly joined the cause as a medic. Though he strongly agrees with Rahmani's leadership style,[3] he is uncomfortable with the overbearing leadership style of the California chapter of the Brotherhood of Steel.[4]

Before joining the Brotherhood, Hardy was teaching Erika Hewsen all he knew about medicine. After he was recruited, he recommended Hewsen to them, leading to her recruitment as an initiate.[5][6]

Solomon Hardy appears only in Fallout 76, introduced in the Steel Dawn update. 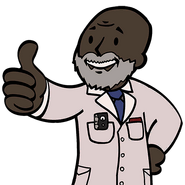 Vault Boy depiction, in the Scribe of Avalon gameboard 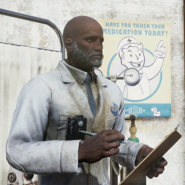 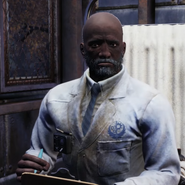