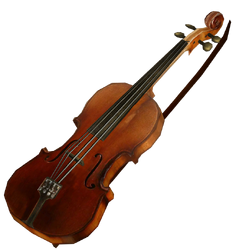 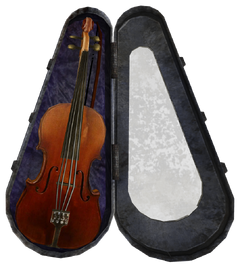 The violin, and case

“It was fabricated way back in 1714 by a famous Italian craftsman named Antonio Stradivari. He had made a bunch of Stradivarius violins actually, and each one was individually named over time to identify them.They are regarded as the most outstanding instruments ever made... and no two sound alike they say. Incredible.”— Agatha

The Soil Stradivarius (pronounced "swal") was one of the most prized and unique instruments ever made by the legendary Antonio Stradivari (c. 1714).

The Soil Stradivarius is a violin that was built by Antonio Stradivari in 1714. Sometime before the Great War, the violin was shipped to the United States. It was taken to Vault 92, a vault dedicated to preserving musical talents for safekeeping.[1]

After the events of the war, the Soil Stradivarius may be the only Stradivarius left in existence, and could be thought of as utterly priceless, as the knowledge and technology to craft such instruments has long since been lost since even before the Great War, as Antonio only passed on his secrets to his two sons, who subsequently took their secrets to the grave with them.[1]

The only reason for the Soil's survival was due to it being loaned to a talented, yet naive young violinist, Hilda Egglebrecht, who was later selected to enter Vault 92 as part of Vault-Tec's desire to “preserve musical talent.”[1] However, after the experiment conducted in the vault went awry, the Soil was left locked away in its own perfectly crafted case, designed to maintain the right humidity and temperature to keep the violin in optimum condition. It sat there, untouched, for over 200 years as the vault around it slowly deteriorated, and mirelurks moved in.[1]

Agatha, an elderly violin player, asks the Lone Wanderer to venture into Vault 92 to retrieve the Soil Stradivarius for her in the side mission Agatha's Song.[2]

Abraham Washington in Rivet City will buy the Soil Stradivarius from the Lone Wanderer for 200 caps; 300 with a successful Speech check. The same is true of Ahzrukhal, the ghoul bartender in the Ninth Circle in Underworld. One can also get the violin back from him by purchasing Charon's employment contract; Charon will then kill him, allowing one to take the violin from his corpse without a change of Karma or social status among the citizens of Underworld. It can then be given back to Agatha.

The violin can be found in Vault 92's 'sound testing' block in a recording studio, which is the southern most room there. It is on a wooden table (map loc.). To enter, activate the "studio computer" on the other side of that hallway.[3]

The Soil Stradivarius is a real violin.

If the Soil Stradivarius is sold to Ahzrukhal and then re-obtained using the method described above, the violin can now be dropped from the inventory and will usually float in mid-air.[verified] 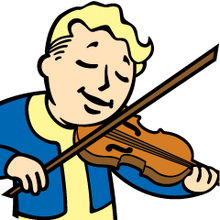 As depicted in Agatha's Song

Retrieved from "https://fallout.fandom.com/wiki/Soil_Stradivarius?oldid=3510025"
Community content is available under CC-BY-SA unless otherwise noted.