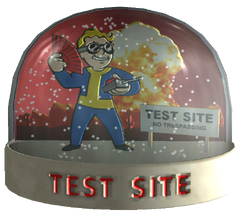 These rare, pre-War artifacts are widely considered to be useless baubles, but rumor has it that some collectors will pay handsomely for them.

Jane tells the Courier that one of Mr. House's favorite snow globes went missing recently. Apparently it was originally placed at the old nuclear test site - how Mr. House got it is unknown.

Lucky 38 cocktail lounge, behind the cash register against the central curved sideboard opposite side of the entrance.

Despite Jane saying that Mr. House lost his favorite snow globe in the casino, you receive no extra reward for finding this snow globe.

Snow globe at Lucky 38 cocktail lounge
Add an image to this gallery
Retrieved from "https://fallout.fandom.com/wiki/Snow_globe_-_Test_Site?oldid=3167966"
Community content is available under CC-BY-SA unless otherwise noted.