These rare, pre-War artifacts are widely considered to be useless baubles, but rumor has it that a certain important collector will pay handsomely for them.

Salida del Sol North, in the upper levels near one of Dean's Secret Stashes. From the southern-most entrance to Salida del Sol South (in Salida del Sol North), proceed down the stairway to the streets and head east. Go up the first staircase and take the rooftops west on the lefthand side. Enter through the hole in the wall. The snow globe will be on the left atop a crate in a room with five desks crammed against a back wall. 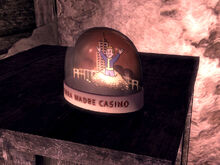 The Sierra Madre snow globe on the crate