Like all add-on snow globes, when picked up, 2000 bottle caps will be granted to the Courier. It will also be automatically placed on the shelf above the snow globe stand in the Lucky 38 presidential suite.

The globe itself, unlike all the others found in-game, is quite badly damaged. This is shown with figures being tilted over, and a large crack down the middle of the globe. The Vault Boy is holding a cowboy hat, similar to the image for the perk Ain't Like That Now.

The Lonesome Road snow globe is located at the Junction 7 rest stop, which is near the end of the High Road. Once you're at the end and the road stops, you can go downhill to the west of the overpass to find a broken down building. The snow globe is located in a knocked over bookshelf on the second floor, under graffiti saying "Give peace a chance!".

The snow globe may disappear, like some other items, if you acquire it and load a previous save.[verified] 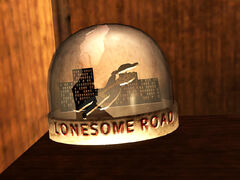 Snow globe in the bookshelf