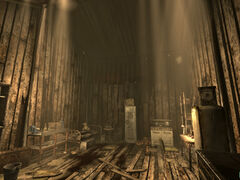 The sniper shack, or abandoned shack in-game, is a building on a cliff to the west of Rockbreaker's Last Gas.

The sniper shack is a single room building, containing a locker, ammunition boxes, a fridge, a stove, metal boxes, and a bed. There is also a workbench and a cage containing the game's only named radroaches: Fluffy and Jitters. These are set to respawn if killed.

The outside of the shack is a spawning point for Talon Company or Regulators, depending on the player character's Karma level. Additionally, after the player completes The Waters of Life, a Vertibird may drop an Enclave soldier and a sentry bot to the northwest. Finally, Super mutants will sometimes spawn by the small pond near the shack.

The sniper shack appears only in Fallout 3.

Bottlecap mine, Keller family transcript, Dean's Electronics in the wooden box on the lower shelf

Guns and Bullets and Victory rifle