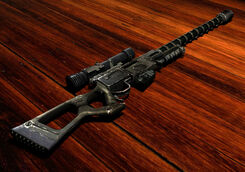 The sniper rifle is a weapon in Fallout: New Vegas.

This section is transcluded from sniper rifle. To change it, please edit the transcluded page.

The sniper rifle is a scoped rifle found in the Capital and Mojave Wastelands. Chambered for .308 ammunition, it is semi-automatic with a five round magazine.

The sniper rifle is a semi-automatic rifle, designed primarily as a long-range weapon, it deals reasonable damage, has a scope with 3.5x magnification and very little weapons spread.

Once modified with a suppressor, it becomes the perfect weapon for an assassin when "hidden" in sneak mode, alerting only those fired upon by the player character at no loss of faction reputation even if the death is witnessed by nearby non-player-characters. With the added bonus of sneak attack criticals, most targets are easily eliminated with a single shot. Due to the rifle's decent rate of fire, any target that survives the first shot can be killed quickly with a second shot before alerting any nearby non-player-characters.

The sniper rifle can fire a total of about 395 standard rounds, the equivalent of 79 reloads, from full condition before breaking.

Sniper rifle with the suppressor modification

Sniper rifle with both modifications