+30 on critical chance rolls with firearms 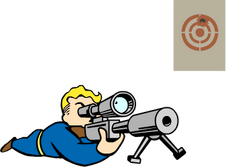 You have mastered the firearm as a source of pain. With this perk, any successful hit in combat with a ranged weapon will be upgraded to a critical hit if you also make a Luck roll. It adds another Luck roll of (10*Luck), hence having 10 LK converts every hit to critical and indirectly causes target's armor DR to be ignored regardless of player weapon. The perk synergises extremely well with weapons capable of burst fire, as every shot in one burst is upgraded. Taken in combination with Better Criticals' 20% chance for insta-kill, it makes burst mode extremely deadly.

You don't waste bullets on flesh wounds. When using firearms, your successful attack rolls are increased by 30 for purposes of determining critical hit results.

Loading screen from Fallout 4
Add an image to this gallery
Retrieved from "https://fallout.fandom.com/wiki/Sniper?oldid=3178676"
Community content is available under CC-BY-SA unless otherwise noted.