“You don't take kindly to raiders, junkies, or tribals trying to "settle" or "stay alive" in civilized lands. Against dirty raider and junkie types as well as Zion's tribals you do +15% Damage and have a bonus to hit in V.A.T.S.”— Honest Hearts description

Sneering Imperialist is a perk in the Fallout: New Vegas add-on Honest Hearts.

Sneering Imperialist provides a 15% damage boost and a 1.25x multiplier to the player character's V.A.T.S. chance-to-hit when attacking members of certain groups, such as tribals, raiders, Fiends, and Great Khans.

Although the perk's description only mentions raiders, junkies, and Zion's various tribals, which non-player characters the perk affects are actually determined by the non-player character's "race" (referring to a game-specific setting rather than perceived racial makeup). This covers a number of groups/factions in their entirety:

In addition, a number of other groups are partially composed of members of the specified race designations:

Finally, a few named non-player characters are covered by this perk: 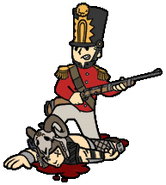