Decreased chance to be detected when sneaking

Decreased chance to be detected when sneaking

Discard to sneak and ignore enemies 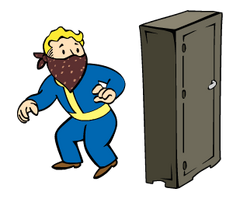 “Become whisper, become shadow. You are 20% harder to detect while sneaking.”— Rank 1 description

Sneak is a perk in Fallout 4, Fallout 76, and Fallout: The Board Game.

The workings of sneaking in general and the associated perk/skill underwent a steady evolution with each new Bethesda RPG. One difference is how the AI reacts to an undetected opponent. In Fallout 3, everyone knew instantly where the player character was as soon as the fight started. In Skyrim, opponents would search for the player character, but in a non-smart way and simply run to the location that they saw or heard something. In Fallout 4, opponents take evasive maneuvers, run in unpredictable ways, jump from cover to cover and try to take a detour in order to flank the player character.

Sometimes, NPCs will turn hostile when stealing from them, even if player character was not caught and was hidden.

Retrieved from "https://fallout.fandom.com/wiki/Sneak_(perk)?oldid=3524865"
Community content is available under CC-BY-SA unless otherwise noted.