Creature · Cryptid
“The horrifying result of experiments with the experimental Forced Evolutionary Virus, the snallygaster has six limbs, numerous eyes along its back, and an extended tongue covered in acidic goo that can rapidly take down any survivors.”— Fallout 76 loading screen

Snallygasters are creatures found in Appalachia.

Experiments with recombinant strains of FEV at the West Tek research center in Appalachia produced numerous failed mutations, with two exceptions. The first of these was FEVS-006443 from October 14, 2077, a Phase 2 combination strain that combined traits that resembled a number of different species. The results were considered disturbing by the scientists but provided valuable insights as to the capability of recombinant FEV. Changes included a number of ocular organs along the enlarged upper torso, a second set of arms ending in clawed digits and a large sickle-shaped claw on each inner toe. The living, stable and functioning subject was sustaining itself normally (a major accomplishment for the program) and was planned for release in Huntersville after the subsequent experiment matured.[1] The mutant was not returned to the area until January 3, 2078, when it escaped containment and the facility. The mutant procreated, leading to the emergence of snallygaster mutants across Appalachia.[2]

The snallygaster is a quadrupedal creature. It has two arms with three claws each, of which one is an opposable thumb, and two small limbs on the back of its body, which it usually uses to support itself while sitting. It has no proper face but has a mouth with a long tentacle-like tongue covered in acid and has multiple eyes along its back. A snallygaster will use its tongue like a whip up close and spit balls of acid at a range. The snallygaster has at least 40 eyes, two rows of teeth and thorns on its back. It has been described as being "a dragon-like demon that haunts an area outside of neighboring DC." They are easily recognizable from a distance, due to their signature clicking sounds[3] and the thick, pungent odor they emit.[4]

Snallygasters are almost exclusively found around highly toxic or irradiated areas in groups of up to four. When provoked, they will spit a ball of toxic slime from the mouth, dealing poison damage. They will then run to the player character and use a melee attack, either scratching or hitting the player character with their tongue. When idle and having not spotted the player character yet, they can be heard making various grunting and snorting noises.

Snallygasters are immune to radiation damage and take 150% damage when struck in the head.

A snallygaster with a dark red hide, giving it the appearance of being covered in blood.

A snallygaster which glows green following exposure to high levels of radiation.

A charred, fleshy snallygaster infected with the Scorched Plague. All regular snallygaster variants have a corresponding Scorched variant with the same stats, abilities and items. They may become Scorched when attacked by scorchbeasts or the scorchbeast queen, becoming allies with other Scorched creatures.

Prior to Patch 18, the snallygasters' toxic spit projectile would remain on the ground for a brief period of time. Although there was never a button prompt, activating the object would move the "snallygaster spit attack explosion" to the miscellaneous tab of the inventory.

Snallygasters appear only in Fallout 76.

A snallygaster at the Clarksburg Shooting Club 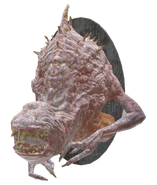