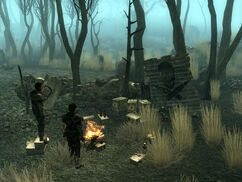 The smuggler camp is an unmarked location in the Fallout 3 add-on Point Lookout. It is west of the Ark & Dove cathedral and is inhabited by three hostile smugglers.

It is a small, open smuggler camp with some alcohol and a few ammunition boxes lying around. In the center are a campfire and some cinder blocks for seats. There is some graffiti on the metal walls in the camp in the shape of a Jolly Roger. Two motorcycles and 10 beers can be found around the campfire.

The smuggler camp appears only in the Fallout 3 add-on Point Lookout.

Retrieved from "https://fallout.fandom.com/wiki/Smuggler_camp?oldid=3207451"
Community content is available under CC-BY-SA unless otherwise noted.