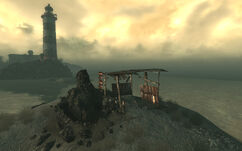 The smuggler's shack is an unmarked location in the Fallout 3 add-on Point Lookout. It is located on a small island, directly south of the Point Lookout Lighthouse.

The shack is an open, rusty, red metal structure, with a bed pressed up against the north wall. A rock forms a windbreak on the west side, with the south and east sides open.

The shack is inhabited by one respawning smuggler of random appearance, armed with a sniper rifle.

The smuggler's shack appears only in the Fallout 3 add-on Point Lookout.

Retrieved from "https://fallout.fandom.com/wiki/Smuggler%27s_shack?oldid=2708557"
Community content is available under CC-BY-SA unless otherwise noted.