Smoke grenades are explosive thrown weapons that were cut from the Fallout 3 add-on Operation: Anchorage.

The smoke grenade was formally cut from Operation: Anchorage, but much like the Tesla cannon (Beta), can be reached out of the normal map boundaries.

After you exit the Field HQ and go left to the big pipe, there's a rock right next to it, and you'll have to get on top of that rock and jump to clear the other rocks (you will likely have to use the save jump glitch, as shown in the video below, although it is possible to jump through without save-loading if you time the jump and angle properly). After you do that then you can walk around freely, the grenades are on a flat plain, and are almost exactly one square west of the Field HQ. There are a total of six which can be found floating knee height. 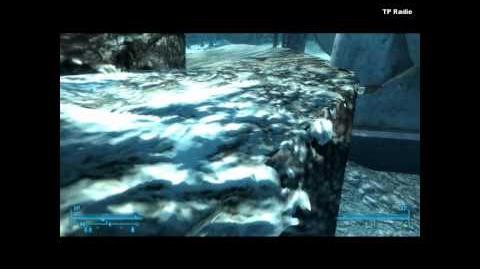