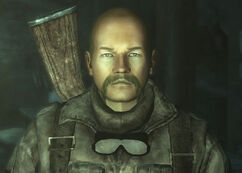 “Shh. Not too loud. I don't really want people to know that we're doin' business.”

Smiling Jack is a non-hostile raider merchant who runs his general shop in the Evergreen Mills bazaar in the Capital Wasteland in 2277.

A master trader and barterer, Jack is a jovial sort, and not just because he has set up shop next to the raider strip club. He mends the raiders' equipment, which keeps him busy and unable to continue modifications on his pride and joy: The Terrible Shotgun.

He stays at Evergreen Mills bazaar running a general shop.

One can find the Barter Bobblehead in the back room of his shop, on a shelf behind a workbench.

Smiling Jack appears only in Fallout 3.

Smiling Jack is a reference to Smiling Jack from Vampire: The Masquerade - Bloodlines, a game developed by former Fallout developers Tim Cain and Jason Anderson. Besides sharing the same name and both having a jovial disposition, Smiling Jack warns the player character in Vampire to 'watch out for shotguns' as they are more volatile to vampires than most guns.

Sometimes, it will be impossible to loot Smiling Jack after killing him. [verified]

Retrieved from "https://fallout.fandom.com/wiki/Smiling_Jack?oldid=3268880"
Community content is available under CC-BY-SA unless otherwise noted.