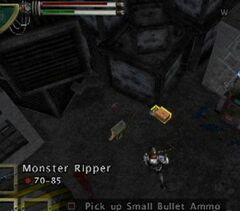 9mm rounds, named small bullets in-game, are a type of ammunition in Fallout: Brotherhood of Steel.

Main article: 9mm
Before the Great War, 9mm was the preferred type of ammunition for small weapons in the Southwest Commonwealth, while the military and the eastern and western seaboards tended to favor 10mm ammunition.

They are used in many small guns and are abundant in Chapter 1. After that, they are quite rare and are more often sold by merchants than found.

Retrieved from "https://fallout.fandom.com/wiki/Small_bullet?oldid=2790418"
Community content is available under CC-BY-SA unless otherwise noted.