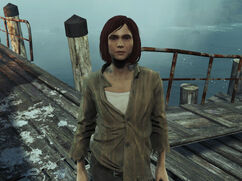 Turn Back the Fog
The Changing Tide

“This ain't about some cat in a tree. A lot of us are starving at the end of the dock, we got no hope. They're all either too proud, too sick, or too poor to ask for something. So it's up to me.”— Small Bertha

Bertha and her family were among those who had to flock to Far Harbor for safety following the Island once again becoming covered in the Fog. Passing through the fog-covered ruins of the town, they made it to the docks; the only place relatively safe from the radiation and fog dwelling fauna. The Mariner, overwhelmed by the sudden flood of refugees, almost kicked everyone out, then Avery stepped in, effectively establishing the settlement. It was here that Bertha's mother, Peggy, discovered that her great-aunt Candace fled the island for the mainland once her home was engulfed by the fog. Seeking a safe haven for her family, her mother left her two children with their father Mark to travel to one of the Dalton family farms, hoping to trade work as a farmhand for shelter.[1] After Peggy left, she was killed and almost the entire Dalton family suffered a similar fate. Later her father would die as well, leaving Bertha and Tony poor and alone amongst the dregs.

Since then, she has acquired a reputation as the informal leader of the dregs of Far Harbor. Known now as "Small Bertha" (or "Smalls"), she is considered crazy by some, but she is actually a competent, hardened and determined girl.[2] She has watched the Harbormen dwindle as they are forced to leave the island entirely in search of food and shelter. Now with the Far Harbor–Acadia alliance, and with the fog condenser technology, she will enlist the Sole Survivor to help reclaim a lost Harbormen settlement; Echo Lake Lumber, which was abandoned long ago as the fog rolled in.[3][4][5][6] She is unaware that its owner is still alive, the last survivor of the family still clinging to his property, driven insane and cannibalistic.[7]

Small Bertha's nickname is a play on the phrase Big Bertha, a general euphemism for something oversized.

Small Bertha appears only in the Fallout 4 add-on Far Harbor.

Outside of The Last Plank
Add a photo to this gallery

Retrieved from "https://fallout.fandom.com/wiki/Small_Bertha?oldid=3373532"
Community content is available under CC-BY-SA unless otherwise noted.