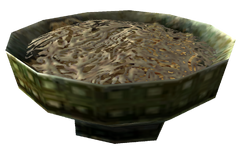 Slop is a food item that is dished out to other slaves in The Pitt by the cook Kai in the marketplace of The Pitt's downtown area opposite Midea's quarters.

While adding a considerable amount of radiation, it restores one of the highest amounts of Hit Points out of all of the food items. According to Kai, it mostly consists of trog meat mixed with the irradiated water from the three rivers in The Pitt. This means that consuming the slop is cannibalism, as trogs are former humans that have succumbed to the environmental conditions in The Pitt. Upon serving slop, Kai will also comment, "It's your funeral."

Retrieved from "https://fallout.fandom.com/wiki/Slop?oldid=3224793"
Community content is available under CC-BY-SA unless otherwise noted.