Slocum's Joe was a pre-War coffee and donut company based in Malden. The company ran numerous coffee shops around the eastern United States and had a special of a large coffee and jelly donut for 30 dollars.

Slocum's focused on two things: Joe (coffee) and doughnuts. While their food was noted by some to exceed the daily recommended amount of carbohydrates and fat,[1] Slocum's always tried to stay one step ahead of the competition, such as by trying to solve the problem of keeping coffee hot and doughnuts fresh.

Their answer was Slocum's Buzzbites, a delicious doughnut filled with hot coffee and chemically preserved to stay hot, which had a 90% chance of inflicting 3rd-degree burns on consumers. This led to it being deemed too dangerous for distribution by authorities.[2] The actual coffee was noted to be "stale, acidic rubbish," priced at 28 dollars.[3] 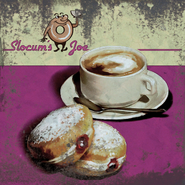 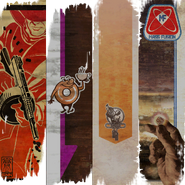