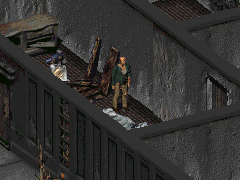 “Well, mister, you sure don’t look chewed up by those rats yet -- but you will if you keep pestering them. Just don’t bring any back here with you.”

Slim Picket is a professional trapper and the informal leader of the trappers of Klamath in 2241.[1]

A tall, lanky trapper, Slim Picket is a veteran wasteland hunter.[1] He knows a great deal about the critters inhabiting the wasteland and will share his knowledge for a price. He and the other trappers settled into the ruined mall on the west end of the town, picking off rats and other critters for food and trade. Normally he likes the taste of rat, spit-roasted with a bit of herbs, but they have become such a nuisance that the trappers barricaded and locked the entrance to the northern section of town.[2] However, the appearance of Keeng Ra'at in the excavated tunnels beneath the mall has caused a surge in both rat populations and their aggression. They think that something is controlling them. Slim had the trappers wall off all access points to the northern part of the mall in an effort to stem the tide.

Kill the rat god: Slim says that something in the caves is controlling the rats west of Klamath. He wants it taken out.

Slim Picket appears only in Fallout 2.

Slim Picket is a reference to actor Slim Pickens, best known for his role in the movie Dr. Strangelove or: How I Learned to Stop Worrying and Love the Bomb as B-52 pilot Major T. J. "King" Kong. Kong rides a dropped H-bomb to a certain death, while waving his cowboy hat as if the bomb were a rodeo bronco. The bomb explodes, triggering the end of the world.

Although his Outdoorsman training session is supposed to cost the Chosen One 100 (or 50) dollars, due to incorrect scripting, the Chosen One will instead receive the money.[verified]

Retrieved from "https://fallout.fandom.com/wiki/Slim_Picket?oldid=3361640"
Community content is available under CC-BY-SA unless otherwise noted.