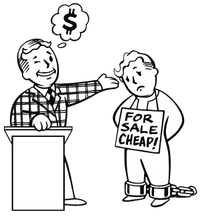 Slavery is a business practice in the post-War world.

In Fallout, the Khans took slaves in their raids, their leader Garl Death-Hand kept a pair of women as slaves.

In Fallout 2, the Slavers Guild is a group of older slavers who decide prices and organize capture hunts in the wastelands. In 2241, the head of the Slavers Guild is Metzger, whose headquarters is in the Den. The Chosen One is able to join the slavers for extra cash, but their Karma will take a beating, and they will be branded permanently as a member of the Slavers Guild, which may negatively impact the reactions of certain NPCs. A large slave-holding pen is run by a slaver named Vortis. Some random encounters feature slavers as well as slaves, often together. If the player is a member of the NCR Rangers or killed Metzger, slavers will act more aggressively towards the Chosen One.

In Fallout 3, Paradise Falls acts as the headquarters of the slavers in the Capital Wasteland.[Non-canon 1] They are led by Eulogy Jones. Their limited clientele includes raiders, Pitt raiders and Allistair Tenpenny.[Non-canon 2] Several quests feature slavery as either major or minor elements, including Head of State and its association to slavery and Abraham Lincoln's role as the "Great Emancipator." Additionally, the Lone Wanderer can capture people to sell them to slavers including Clover, who will then serve them as a bodyguard.

Wernher states that many of the slaves are shipped off to work at the Pitt, a brutal and heavily irradiated town located in the ruins of the pre-War city of Pittsburgh, run by the slaving raiders.[1] Hannibal Hamlin, an ex-slave, leads a group known as the Abolitionists. Residing in the Temple of the Union, they aim to abolish slavery everywhere.[Non-canon 3]

In Fallout: New Vegas, Caesar's Legion is an entity that enslaves those it captures. Its military force is based on enslaving tribal populations. Although a principal source of slaves are tribes, Legion does purchase captives from third parties, through the Officiorum ab Famulatus.[2] The prisoners of the New California Republic describe their treatment as slave labor, resulting ultimately in their escape and the formation of the Powder Gangers.[3] The Omertas supply drugs to their employees long enough to result in addiction, and then start charging, described as "slavery through a needle."[4]

Slavery is a theme in Fallout 4 as the Railroad considers the Institute's use of synths as slavery. The Railroad tries to assist synths to escape this treatment.[5] A member of the Gunners, Bullet, expresses an interest in purchasing a ghoul child named Billy Peabody.[6] A potential companion, Cait, mentions being sold into slavery by her parents.[7]

Slavery is commonly practiced by the raiders in Nuka-World. Slaves are used as laborers and merchants by their overlords, working in and around the Nuka-Town market. Some are kept in cages and forced to fight animals by the Pack for amusement. They wear shock collars, making them easily identifiable.

In Fallout 76, Hal Gleeson, Maximum Maddie and Deathklaus are slaves under Sargento.

In Fallout: Brotherhood of Steel, Jane and her raiders operating in Carbon, Texas are known to have slaves. She mentions she intends to sell them and will kill them if they try to run. 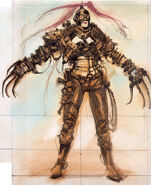