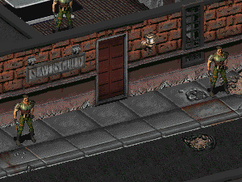 “We kicked some serious ass. Metzger better give us a big bonus.”— A slave run slaver

Den slavers are hoarding people in the Den East Side and selling them as slaves in 2241.

They are slavers and guards loyal to Metzger, the owner of the Slaver's Guild.

* Two slavers have one of the two. All the Den slavers will be reinforced because of how the game engine modifies critters with identical proto IDs.

Slavers from the Slavers' Guild appear only in Fallout 2.

Retrieved from "https://fallout.fandom.com/wiki/Slaver_(Slavers%27_Guild)?oldid=3350435"
Community content is available under CC-BY-SA unless otherwise noted.