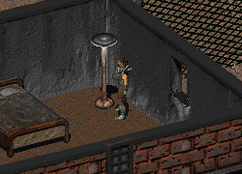 Free the slaves in the slave pen, for the Rangers

Slave overseer is a slaver living on the outskirts of NCR in 2241.

During his childhood, like most people, he searched with his friends to find Vault 13. However, he never found it and evenetually became a slaver.

In 2241, he sees to it that the slaves are working (or they would pay the consequences). Furthermore, he assists Vortis in his duties of obtaining more slaves.

The slave overseer appears only in Fallout 2.

Retrieved from "https://fallout.fandom.com/wiki/Slave_overseer?oldid=3286730"
Community content is available under CC-BY-SA unless otherwise noted.