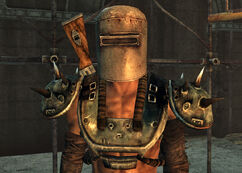 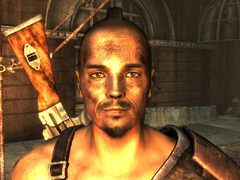 Slave master without his helmet

“What? You want me to knock your teeth out. Shove off!”

The slave master is a slave overseer found at the The Pitt Bridge entrance to The Pitt Downtown in 2277.

He is tasked with watching The Pitt Bridge for any dangers coming in or any slaves coming out. Most days are uneventful, but every once in while, he gets a slave trying to escape, so he takes pot shots at them with his rifle.

He oversees the slaves and occasionally "motivates" the workers by shooting in their direction.

The slave master appears only in the Fallout 3 add-on The Pitt.

Retrieved from "https://fallout.fandom.com/wiki/Slave_master?oldid=3347369"
Community content is available under CC-BY-SA unless otherwise noted.