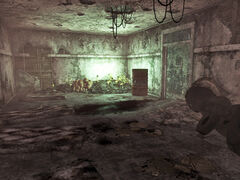 The slave house is a location within Paradise Falls in Fallout 3.

The slave house is a simple rectangular building made up of a single room. Several mattresses lay on the floor to accommodate the slaves living there. If the player character has taken the Strictly Business quest, any 'VIP' slaves they have captured will appear within the slave house, but any non-VIP non-player characters that they have enslaved (such as raiders and Enclave soldiers) are removed from the game when they arrive. The player character can attempt to free them and in the process might accidentally detonate the collar.

The slave house can be entered through the adult slave pen, which is to the right as one approaches the pens.

Inside is a pre-War book on the table at the back of the room.

The slave house appears only in Fallout 3.