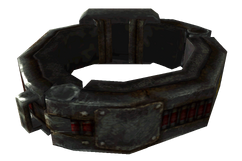 A slave collar is a pre-War control device utilized by slavers for the purpose of capturing and forcing slaves into submission.

Slave collars are used by the slavers from Paradise Falls. The collars send a frequency to Paradise Falls to keep track of where every collared slave is.

It is possible to remove a collar from an enslaved non-player character, simply by talking to them and selecting the appropriate conversation choice. Success in removing the collar is based on the player character's Science skill: one's skill must be at least 25 to attempt to remove the collar, with only a 50% chance of success. The likelihood of success increases in steps (at skill levels 50 and 75) up to a 100% success rate.

Outside of initiating conversation, the player character may be approached in the Wasteland by an escaped slave still wearing a slave collar, who will beg for the collar to be removed. The collar will also explode if struck by the Mesmetron. As Grouse states, "The Mezzer rays trigger the collar's self-destruct mechanism, so once the collar's on, don't shoot the slave with the Mesmetron, unless you want to pay me for a new collar." There are two versions of this item; the first is a quest item given to the player by Grouse for use in the quest Strictly Business, along with a Mesmetron. It has a weight of 1 and a value of 0, and cannot be removed from the player character's inventory except by enslaving a non-player character.