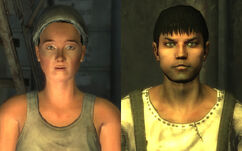 “I suppose it doesn't matter if I tell you. I used to be a slave. I saw a Slaver on this ship, his name is Sister. I'm afraid he's after me.”— Mei Wong

Slave Hunt refers to an unmarked quest in Fallout 3.

When talking to Mei Wong in Rivet City, you can find out she is an escaped slave and therefore scared of Sister, a slaver who is hunting a rogue android. While Mei's fears are unfounded and Sister isn't particularly interested to learn she's a former slave, it's still possible to make her overreact and kill herself.

You have a couple of options (other than ignoring the situation entirely):

Mei Wong may not actually buy a pistol after you give her the money. You could rectify this by reverse pickpocketing a pistol and ammunition to her. [verified]