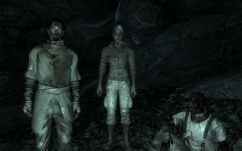 Slaves are victims of slavery in the Capital Wasteland in 2277.

Slaves are unlucky wastelanders that have been captured by slavers working at Paradise Falls.

The different models of slaves present in the game:

Slaves from the train tunnel with Prosper

Add a photo to this gallery
Retrieved from "https://fallout.fandom.com/wiki/Slave_(Fallout_3)?oldid=3410845"
Community content is available under CC-BY-SA unless otherwise noted.