Slaves, in Fallout: New Vegas, are people forced into servitude for Caesar's Legion in 2281.

Slaves are wastelanders, tribals and civilians who have been captured by Caesar's Legion and have been forced to serve Caesar and his army. Slaves at The Fort carry goods in large backpacks up and down the steep hill to and from the camp. They obey their captors and infrequently engage freely with the Courier, unwilling to risk consequences at the hand of the Legion. 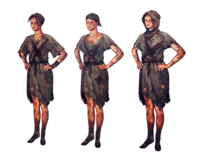